PUTRAJAYA, July 18 — Pakatan Rakyat (PR) continues to lead in the voter registration drive, signing up twice the number of voters compared to Barisan Nasional (BN) in the first six month of 2010.The DAP also lead in signing up more voters compared to other political parties, registering 32.5 per cent of the new 169,838 voters registered between January and June this year.  Umno followed closely behind, registering 32.3 per cent of the new voters while PAS, 22.7 per cent in the same duration.According to the Election Commission’s (EC) records obtained by The Malaysian Insider, PR was also surprisingly ahead of BN in registering voters in Johor, which is seen as an Umno stronghold. In the Malay peninsula, PR has signed up a total of 107,050 new voters in the first six months of the year while the four major BN component parties had only registered 59,351 voters.
The MCA only registered 2,897 new voters followed by MIC with 1,109, Gerakan (471) and PPP (four). In Sabah and Sarawak, BN parties registered a total of 3,500 new voters. The EC’s statistics showed that out of 107,050 new PR voters, half of them were registered by DAP through the party-appointed assistant registrars. PAS and PKR registered 38,631 and 13,098 new voters respectively. The statistics also showed that registration of new voters in Sarawak remained low despite speculation that the state election would be called soon. According to previous reports, out of the 4.4 million unregistered voters, 33.7 per cent are from Sarawak and 26 per cent are from Sabah. Umno is the major BN party in Sabah while PKR and DAP have been campaigning actively in Sarawak.
PR however, is ahead in new voters registration in Penang, Kelantan, Selangor, Kedah and Perak. The five states were won by PR in 2008 but Perak has been under BN’s control since early last year. In Kuala Lumpur, where PR won 10 out of 11 Parliamentary constituencies, the opposition federal coalition was also leading in registering new voters. Shockingly, the Umno stronghold of Johor saw PR beating the ruling coalition in signing up voters. Almost 60 per cent of the new voters registered by political parties were registered by PR parties. However in Terengganu, almost half of the new voters were registered by the BN’s assistant registrars. 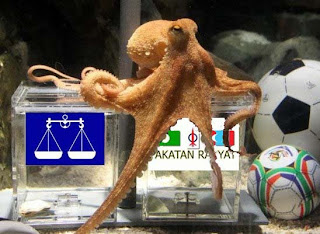