Must Read Article: BN Only Talks, But PAS Transforms 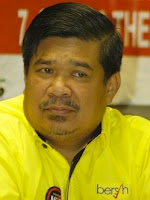 PAS’ biggest step towards change is probably the election of Mohamad Sabu as its new deputy president, making this the first time a non-ulama has taken that position since the party adopted the Kepimpinan Ulama (Leadership by the Ulama) policy in 1985. Mat Sabu is well-regarded by the non-Malays. He is a powerful orator and he is expected to be an effective counter to Umno’s attempts at brainwashing the Malays with irresponsible propagandizing. His inclusion in PAS’ top leadership will be an asset to Pakatan Rakyat as the coalition braces for the next general election.
By Kee Thuan Chye, Malaysian Digest
Read More Here
Posted by Unknown at 6:50 AM