SHAH ALAM, April 28 — PKR could lose up to five more lawmakers who are disgruntled with the party and are waiting for the right moment to announce their resignations, said Datuk Sallehuddin Hashim (picture). 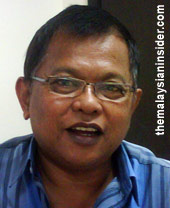 The party has already lost nine lawmakers, including four MPs, in the past two years and suffered another blow last Sunday when it failed to retain the Hulu Selangor parliamentary constituency in a by-election. It now has 26 MPs.
“Those MPs and state assemblymen, who had been contemplating leaving the party, have all decided but are waiting for the right time to do so in view of their particular beef.” the former PKR secretary-general told The Malaysian Insider yesterday. He said the five each had his own “trigger-point”, when asked if Sunday’s Hulu Selangor by-election defeat would be a catalyst for more defections from the party.
“If by ‘defections’ you mean elected representatives leaving the party, the expected loss of Hulu Selangor is an insignificant event.” Sallehuddin pointed out that ’desertions’ among leader in the grassroots has been continuous since the early days of Datuk Seri Anwar Ibrahim’s second sodomy court hearings.
Comment: We can't deny the fact that this is possibly be true. Let's pray this would not happen.
Posted by Unknown at 6:39 PM