KUALA LUMPUR: A former Malaysian general and four other senior officers have sued the armed forces for wrongful dismissal over the theft of two missing fighter jet engines, their lawyer said today.In January, a Malaysian air force sergeant and a businessman were charged over the theft of the engines worth US$29 million (US93 million), but the attorney-general said no senior military officers were involved. 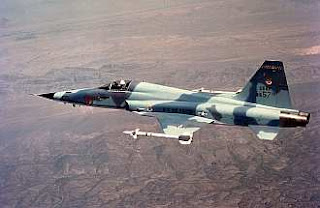 However, Brig-Genl Abdul Hadi Abdul Khatab and four other senior officers -- Mej Rusli Ibrahim, Mej Noor Zeelan Draman, Lt Col Mohamed Ariff Mohd Daud and Col Mohamad Sani Sumarnak -- have complained they were forced to retire over the issue, lawyer Zalil Mohammad Mess said. "The council had asked them to explain allegations of misconduct and negligence over the theft in 2007, which they did and they denied the allegations but were later forced to retire," Zalil said. He said the five were seeking up to RM5 million in damages as they felt the affair implied that they had cheated the government and caused it to suffer losses due to negligence.
Government lawyers have applied to quash the suit which will be heard on May 21, he said. The Malaysian government faced a storm of criticism and allegations of official corruption after two Northrop F-5E jet engines were reportedly taken from a military air base in 2007 and sold on the black market to a South American company. The two engines were traced to Uruguay in February and authorities say they are in the midst of securing their return. A number of countries subject to US arms embargoes, including Iran, Sudan and Venezuela, have F-5 fighters that use the antiquated engines. The jet first flew in 1963 and Northrop ended production in 1989.
- AFP
Posted by Unknown at 6:52 AM